You might be thinking, “There aren’t that many types of condoms.”

But if I asked you to name ten, I bet many people would fall short. The truth is, there have been many descendants of the original sheep intestines that our ancestors wore.

Some great, some just for fun, others lacking in protection. 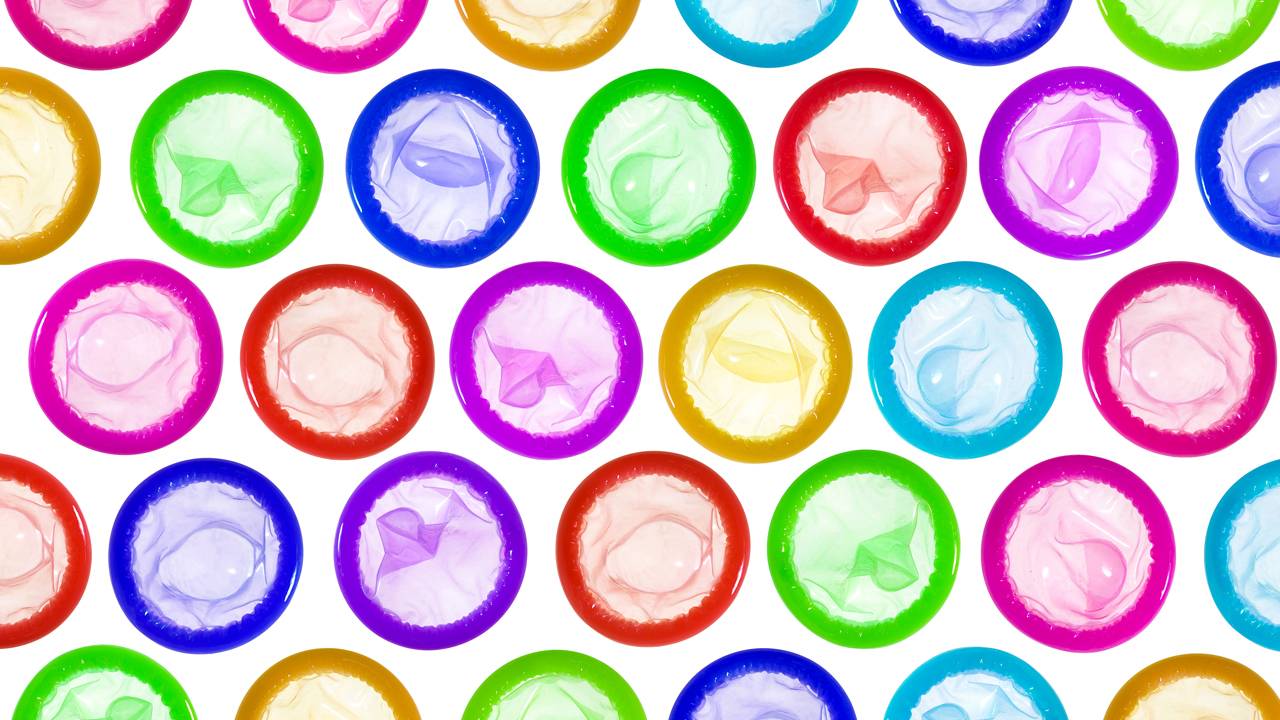 The good old boys, the kind of penis cover we usually associate with condoms. But, remember, although they protect against pregnancy and STIs, they’re not 100% effective. Also, some people are allergic to latex.

If you have a latex allergy, these are the ones to get your hands (or mouth) on. SKYN is one of the most common brands and comes in two sizes. I can also vouch for them since I faithfully use them myself.

Another latex-free option. They are also super thin (some men say they can’t even feel them) and transmit heat very well. But, while they help protect against pregnancy (less than latex condoms though), they do NOT protect against STIs.

No, not all condoms are filled with spermicide – you’re probably thinking of sex lube. You can go the extra step towards pregnancy protection by using these. However, it’s worth mentioning that some people have sensitivities or straight-up allergies to spermicide.

If your man blows his load too fast, some condoms come with a special anesthetic lubricant gel that will help prolong the pleasure – benzocaine 5%, for example.

“Pouched” condoms are on the opposite side of the scale from PE condoms. They look like any other condom except for an extra balloon of latex near the tip which creates more friction and enhances pleasure.

If you’re bigger or smaller than average, and average sizes don’t fit properly, there are extra large/small ones out there. HOWEVER, don’t let this go to your head. It’s about girth, not length. Trying to go “up a size” for your ego might end up with the condom slipping off and a higher risk of unwanted pregnancy or infections.

These are generally made by putting a light reactive pigment between two layers of latex condom material. You expose them to light for a few minutes, put them on, then surprise your partner with your shining dong. While most of them are approved by the FDA, you still have to be careful you’re getting real condoms and not just novelty items that could cause an allergic reaction (or worse).

From banana to bacon, the oral-sex-friends come in an endless array of flavors (some close to the real thing, others with more of a hint of taste over a strong latex base note). There is a LARGE disclaimer that if you use them for vaginal sex, make sure they don’t contain sugar – so you don’t get a yeast infection. Not to be confused with flavored! They also shouldn’t be treated as a regular condom – more of a novelty, or something like edible underwear. They’re like a candy sheath over the penis that the partner sucks away while giving head. Two problems – they obviously don’t protect against anything AND the reviews I read have been pretty bad. So ya know.

Dots, ribs, waves, you name it. Textured condoms are designed to enhance pleasure through additional sensations during intercourse. Some are just for the boys, others are aimed at women, a few targets both.

French ticklers are sort of textured condoms on steroids. Ridges, bumps, shapes, nubs are added to the head of the condom and are meant to add new sensations during sex. IMPORTANT – they do NOT protect against pregnancy or STIs!

You’ll find a coating of warming sex lube on the inside and outside. If you love the sensations, great! But some people find they have allergic reactions to the compounds which cause the heating. If you’re not sure, rub some of the lube on the side of your arm and wait a couple of days.

The struggle is real – awkwardly trying to put on a condom in the middle of a passionate moment. They’ve also been known to rip if not put on properly. The good news? Sensis has made condoms with little, detachable pull tabs on the side, which makes putting them on easy-peasy and safer.

You’ll find these have fun patterns on them – technically, glow in the dark, edible, and French ticklers could also be considered novelty. These are for fun. Not protection.

I bet you forgot about these huh? FCs consist of a soft, loose-fitting pouch with a ring at each end. They’re a little more expensive, “louder”, and can certainly be felt during sex, BUT they allow women to take protection matters into their own hands without relying on a man to bring something.

Have any of you had experiences with some of the “lesser known” condoms? Dare to share in the comments?